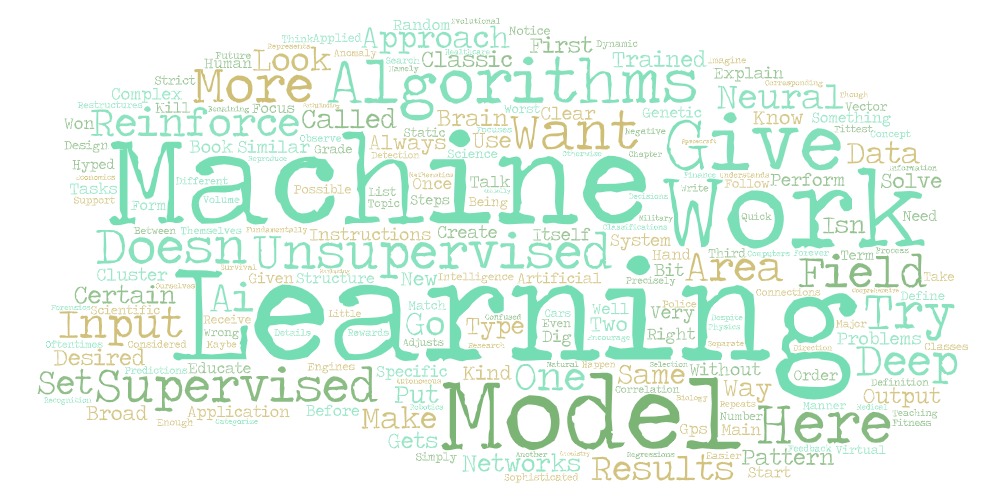 Machine learning is fundamentally is just the science, in which we focus on teaching machines or computers to perform certain tasks without being given specific instructions. We want our machines to learn how to do something themselves without explaining it to them.

In order to do this, we oftentimes look at how the human brain works and try to design virtual brains that work in a similar manner.

Here, we give our model a set of inputs and also the corresponding outputs, which are the desired results. In this way, the model learns to match certain inputs to certain outputs and it adjusts its structure. It learns to make connections between what was put in and what the desired output is. It understands the correlation. When trained well enough, we can use the model to make predictions for inputs that we don’t know the results for.

With unsupervised learning on the other hand, we don’t give our model the desired results while training. Not because we don’t want to but because we don’t know them. This approach is more like a kind of pattern recognition. We give our model a set of input data and it then has to look for patterns in it. Once the model is trained, we can put in new data and our model will need to make decisions. Since the model doesn’t get any information about classes or results, it has to work with similarities and patterns in the data and categorize or cluster it by itself.

Then there is a third type of machine learning called reinforcement learning . Here we create some model with a random structure. Then we just observe what it does and reinforce or encourage it, when we like what it does. Otherwise, we can also give some negative feedback. The more our model does what we want it to do, the more we reinforce it and the more “rewards” it gets. This might happen in form of a number or a grade, which represents the so-called fitness of the model.

In this way, our model learns what is right and what is wrong. You can imagine it a little bit like natural selection and survival of the fittest. We can create 100 random models and kill the 50 models that perform worst. Then the remaining 50 reproduce and the same process repeats. These kinds of algorithms are called genetic algorithms. Classic reinforcement learning algorithms are genetic or evolutional algorithms.

This five of the most popular frameworks are:

Torch originally released in 2002 by Ronan Collobert for the purpose of numeric computing. The computations of Torch involves multidimensional arrays called tensors. Tensors can be processed with regular vector or matrix operations. Torch acquired routines for building, training, and evaluating neural networks.Corporations like IBM and Facebook had great deal of interest in Torch. The other frameworks Theano, Caffe, Keras, and TensorFlow — can be interfaced through Python, which has emerged as the language of choice in the machine learning domain.

Theano was developed in 2010 by machile learning group at the University of Montreal. It was released as a library for numeric computation. Like NumPy, Theano also provides a wide range of Python modules for operating on multi-dimensional arrays. but theano stores operations in a data structure called a graph, which it compiles into high performance code. Theano supports symbolic differentiation, which makes it possible to find derivatives of functions automatically.

This framework as developed at UC Berkeley. It is a framework for developing image recognition applications. Caffe is written in C++, and like Theano, it supports GPU acceleration.

The Google Brain team released TensorFlow 1.0 in 2015, the current version is 1.4. It’s provided under the Apache 2.0 open source license, which means anyone is free to use it modify it and distribute modifications. Python is the primary interface in TensorFlow, but like Caffe, its core functionality is written in C++ for performance. TensorFlow applications can be executed on the Google Cloud Platform (GCP).

The easiest and most basic machine learning algorithm is linear regression .It is a supervised learning algorithm. It is an approach to model the relation between a response i.e. dependent variable ‘Y’ and one or more independent or explanatory variables ‘X1,X2..’ .

In linear regression we now predicted specific output-values for certain given input-values. Sometimes, however, we are not trying to predict outputs but to categorize or classify our elements. For this, we use classification algorithms.

In K-Nearest-Neighbors classifier, we assign the class of the new object, based on its nearest neighbors. The K specifies the amount of neighbors to look at. For example, we could say that we only want to look at the one neighbor who is nearest but we could also say that we want to factor in 100 neighbors.

Another popular classification algorithm is called logistic regression. It looks at probabilities and determines how likely it is that a certain event happens (or a certain class is the right one), given the input data. This is done by plotting a logistic growth curve and splitting the data into two.

With decision tree classifiers, we construct a decision tree out of our training data and use it to predict the classes of new elements.

This classification is based on decision trees. What it does is creating a forest of multiple decision trees. To classify a new object, all the various trees determine a class and the most frequent result gets chosen. This makes the result more accurate and it also prevents overfitting

Data Science Getting Started with Hadoop